No Joy for James in Carlisle But R5 Killarney Adventure Awaits! 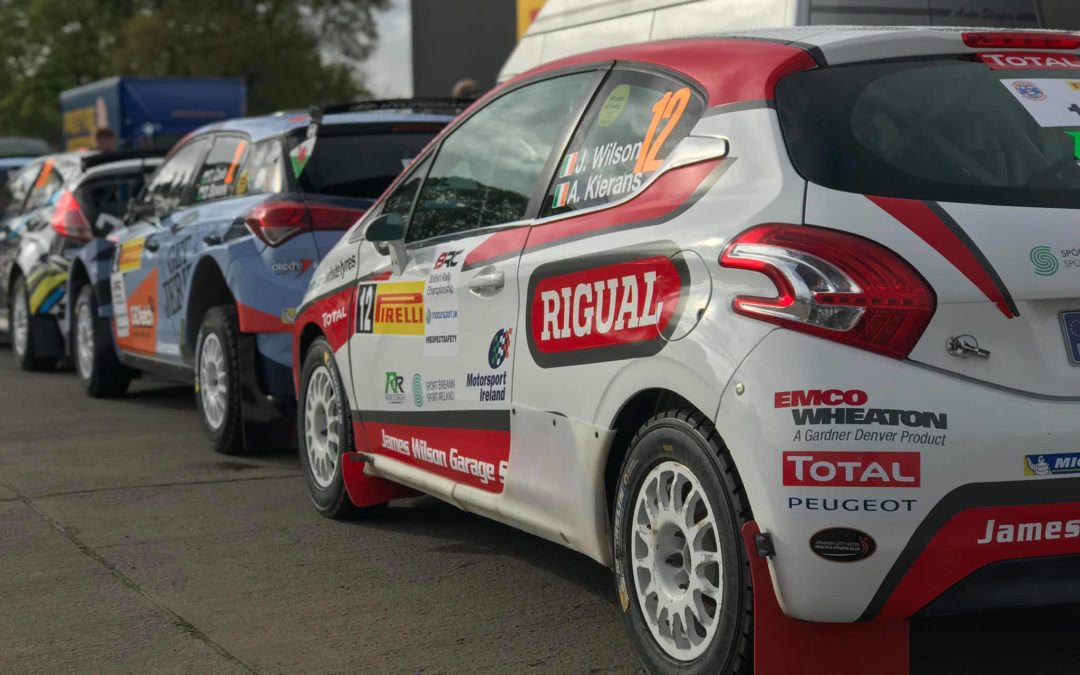 For Motorsport Ireland Billy Coleman Award winner James Wilson and his co-driver Arthur Kierans, round three of the British Rally Championship (BRC), the Pirelli Rally in the Kielder forest complex last weekend was not a lucky one.
On the first stage the crew suffered a time consuming puncture and on stage two the crew retired the Peugeot 208 R2 with persistant oil pressure warnings, and suspected oil pump problems.

“Both Arthur and myself were pretty gutted. On Wednesday we had tested the car and combined with a good recce, everything was in place for a real challenge for Junior victory at the rally. Not far off the start of stage one however we got the first oil light flicker and on an early corner the car actually cut out, putting us off line slightly and we must had touched something to pick up a puncture. We made it to stage two after losing over a minute on the first test, but with the oil pressure dropping we had to make the decision to retire and save the engine. My focus now more than ever for the remaining BRC campaign is to go for it on each rally ,really strive for victories, focus on our speed rather than consistency. The next round on the smooth tarmac in Belgium for the Ypres Rally on 28th-29th June is one that I am very much looking forward to, after gaining valuable experience last year, so all is not lost.”

Instead of the team dwelling on the disappointment, there is now mega-excitement, as thanks to the development programme in the Motorsport Ireland Rally Academy, James and Arthur will line up for this weekend’s Killarney International Rally in a Philip Case Rally Sport (PCRS) Hyundai i20 R5. “We will be lining up at number nineteen in the car that Tom Cave took to victory in Carlisle. It’s a proven car, a big step up from the R2 machine and it’s the fortieth anniversary of the Cartell.ie Killarney Rally of the Lakes. With over 230 kilometres of competitive driving on those epic roads in store I simply cannot wait! The challenging Cods Head and Ardgroom tests are ones that I enjoyed on previous visits, and of course the Tim Healy Pass, Molls Gap and Gortnagane are included in the classic stage menu, so it promises to be a fantastic rally. Our main aim is to get the finish, and get in all of the valuable miles in the R5 car. We need to bed ourselves in on the first day, with the plan to up the pace on Sunday, but as we know anything can happen in rallying!”

Thanks to Motorsport Ireland, Sport Ireland and support from Rigual SA, Road Tankers Armagh, the Michelin shod Hyundai i20 R5 will cross the Friday evening ceremonial start in Killarney, before setting of on Saturday morning for eight of the sixteen stages to be traversed in this two day rally adventure. “Doing a two day event is a real bonus for gaining extra experience with the car. After the brief runs in the Hyundai on the Motorsport Academy development days, and today’s test with the PCRS team, we are feeling happy and excited about the rally ahead.”

It’s a significant weekend ahead for the young engineer, as he will will have to adapt to four-wheel drive and turbo-charging, against a line up of vastly experienced and rapid R5 driver’s. It’s an important weekend in the Armagh driver’s rallying career as the R5 car is next step up from the front wheel drive R2 machine, and thousands of avid fans will be lining the hedge-rows to witness the team’s progress.