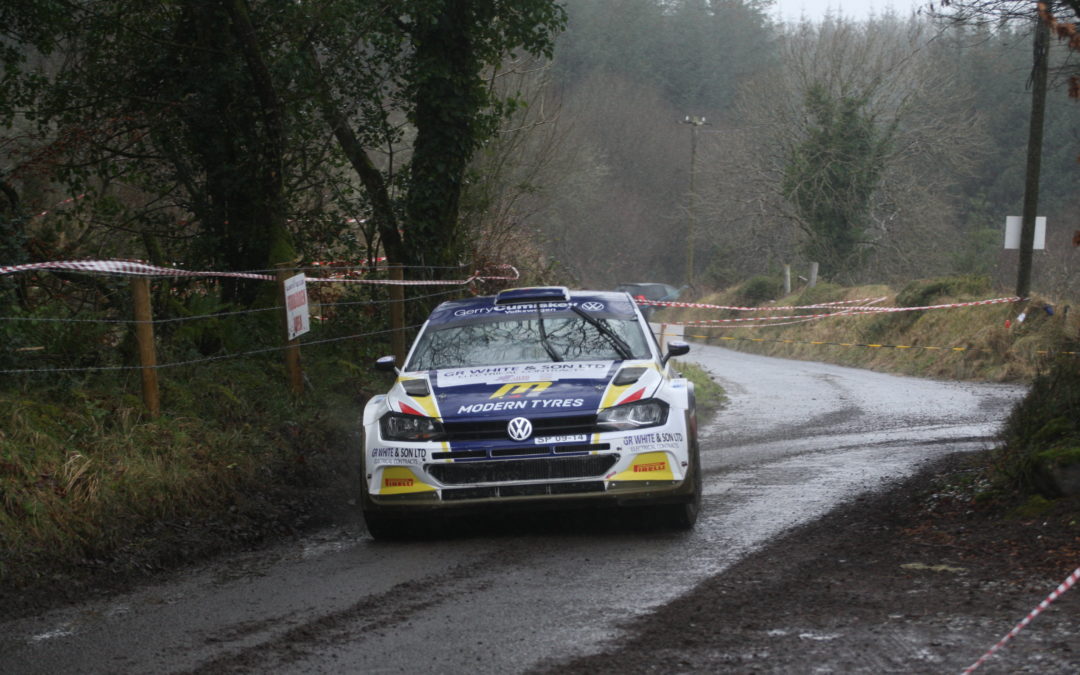 Alastair Fisher adapted quickly to his new Volkswagen Polo R5 to win the Galway International Rally, the opening round of the Irish Tarmac Rally Championship. Fisher won four out of the rally’s first five stages and managed his lead over the remaining stages to take his first overall ITRC victory by an impressive 21.1 seconds.

While Fisher and co-driver Gordon Noble disappeared into the distance a brilliant battle for second ensued throughout the rally. Sam Moffett, who was also in a new car, took the runner-up position after his fastest time on the final stage moved him above Donagh Kelly by a slender 1.7 seconds. Moffett won three of the final four stages as he got used to his Hyundai i20 R5. A stall on Stage 5 cost Kelly several seconds and ultimately second place.

Welshman Meirion Evans was pleased with his fourth place in conditions he admitted didn’t suit his driving style and experience. A loss of power at the start of Stage 2 cost him over 20 seconds and dropped him out of the running after a third fastest time on Stage 1. He too was getting used to a new car as he set the fastest time in his Polo R5 on the third running of Tynagh.

2018 ITRC champion, Josh Moffett, held fifth position for most of the day, just off the pace of his rivals. He too was upbeat with limited experience in his car after swapping to the Hyundai from a Ford Fiesta R5.

In the R2 class, Eamonn Kelly took the class victory in his Fiesta R2T after jumping ahead of Jason Dickson on the penultimate stage. The pair of young drivers were only separated by a few seconds all day until Dickson’s slow time on Stage 8.

Pat O’Connell won the National category in his Mitsubishi Evo ahead of Jason Black’s Toyota Starlet. Black, who returned from rallying after a 10-month break, was quickest in two-wheel-drive ahead of local man Richard Whelan who finished third in the modifieds in his BMW 130i.

Maurice Meskell won the Historic section in his Ford Escort by over two minutes while Noel Murphy pipped Gareth Deazley to the Junior win by a mere 11 seconds.

“It is nice to finally get over the line and take our first Tarmac win. It was a tough final stage with a lot of muck pulled out onto the road. It was definitely a tricky one but thankfully we got through it okay. There were quite a few delays on the last loop of stages so we really had to keep our focus but we’re glad it worked out alright”