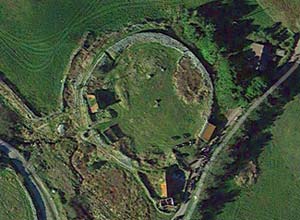 Shrone locals – who for decades have celebrated a very special Mass every May – have kindly agreed to postpone it by a week – to facilitate this year’s Rally of the Lakes.

The outdoor Mass in the City of Shrone in Rathmore was due to take place on May 5, but will not happen until the following Sunday, May 12 at1.30pm.

Road closures in the area take place from 1pm to 6.30pm on Sunday, May 5 as the annual Rally of the Lakes is passing through.

The Mass takes place at an ancient burial ground annually in early May. On the site is an ogham stone and a megalithic tomb in the townland of Aunaskirtane and it’s considered to be the oldest still revered spiritual site in western Europe, and may have been founded by the Tuatha de Danann over 10,000 years ago.

“It is a tradition that has been going on the area for years and years,” Fr O’Sullivan told the Killarney Advertiser.

The City, known as Cathair Crobh Dearg in the shadow of the Pap Mountains, was an ancient pilgrimage site going back to pre-Christian times. Right down through the ages, through Druidism and Paganism and through many mutations of human searching, religious ceremonies have been enacted on this site, he added.

“Over the years like other sites such as Croagh Patrick, it has been Christianised. In modern times Mass is celebrated in ‘The City’ on the first Sunday in May, since about 1983. In 2017, Bishop Ray came to celebrate the Mass with us. They come from the Cork side and the Clonkeen side and many people walk there. Please spread the word especially to people who attend annually and are not in our parish.”